The final race of the Cross Country Calendar was in Gloucester Plock Court. And for once it was nice to see a flat course and no sign of any hills. Although the going underfoot was still heavy going due to the amount of rain we have had over the winter.

The teams were depleted a little due to illness, but we still managed to put out a ladies and a men’s team which is great to see.

The course had to be adjusted due to one area being under water. This did not make it any easier though. First out were the ladies team. They competed very well, Becky Hardie finished a very creditable 27th out of 76, followed by Lorraine Westcott and Tracy Kennish. (I think Tracy is still talking to me!!! Well done on your first BPJ cross country run…).

Overall the ladies team finished 16th out of 18 teams. Well done to all that have raced this year.

As for the men’s team we were a little light on numbers compared to the previous fixtures, but we still managed to put in a good performance. Leading the BPJ’s home again was Darren Salisbury who put in a very impressive run to finish 3rd in the race and he also won first place overall in his category in the Over 45’s. This was an outstanding performance. The men’s race was four laps over a muddy course which was hard work all the way around. For some this caused confusion as they decided to put in a sprint finish on the third lap and then realised that there was another lap to go…. I won’t tell anyone Matt!!!!! Thankfully he carried on and still finished well. Overall the team came 6th out of 12 teams and again beating a lot more established teams!!!

On conclusion to the Cross Country season I must confess it has gone better than anyone could of wished. And I think we have well and truly put Team Black Pear Joggers on the Cross Country map. I would like to thank everyone that has raced this season and an even bigger thank you to all the supporters that have come along and shown their vocal support.

I look forward to seeing more people coming along later this year for the next season which starts in October 2013. And next season we will have a Team BPJ tent which will be great.

The next fixture will be in October 2013. Details of race times to follow.

If you require any further info then contact Chris Harris (Cross Country Organiser) via Facebook or e-mail [email protected].

For photos of all the cross country fixtures, visit the gallery page.

Another good result for BPJs at the Gloucester Cross Country League 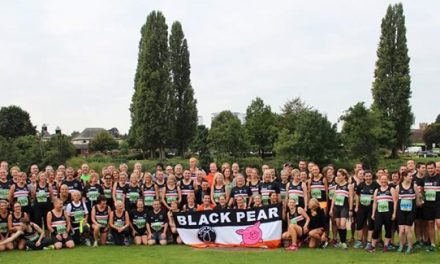