Stuart had been with the club since its start as ‘Worcester Joggers’, supporting hundreds of members over the years with his Sunday morning marathon training, leading groups on club nights and convincing many into running their first marathon; himself completing his 100th marathon at Snowdonia in October 2012.

Stuart Wild sadly passed away on Friday, 1st March 2013 while out walking with his wife Sian Wild. Stuart was a true inspiration and will be sadly missed by all of us.

Snowdonia 2012 marked Stuart’s entry into the 100 Marathon Club, having completed 100 marathons since 1990. The Black Pears had a celebration to mark the occasion and to pay their respects for the support he has given. Here are some interesting statistics from the 100 marathons: View the full list of the 100 Marathons. 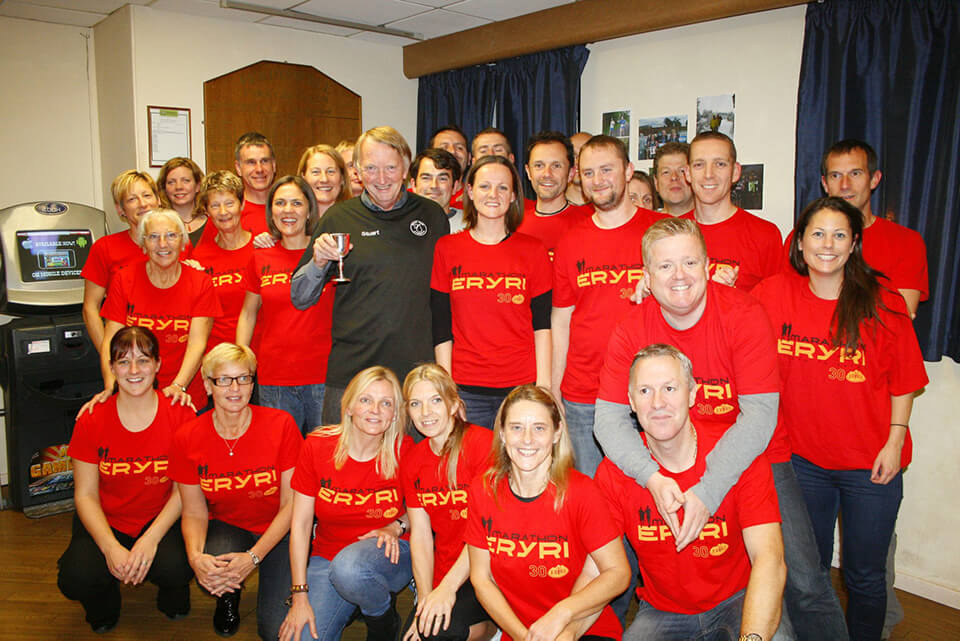 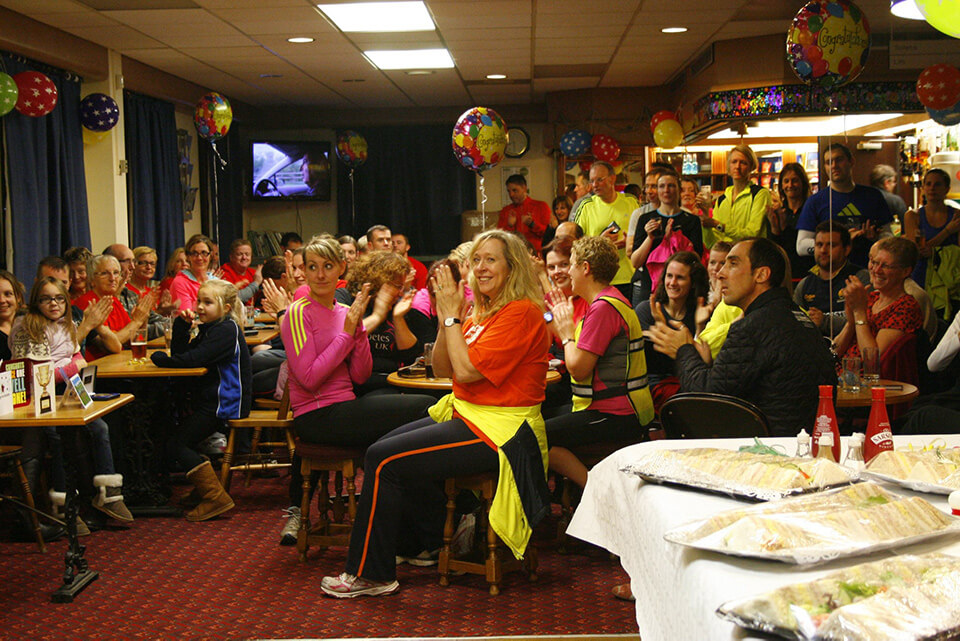 “I think BPJs doing long runs and races will always feel Stuart’s enduring spirit supporting them. Our gratitude to him is endless.” – Peter Gilbert

After completing his 100th marathon, Stuart was featured in the popular Runners World magazine where he gave a shout out to the club. 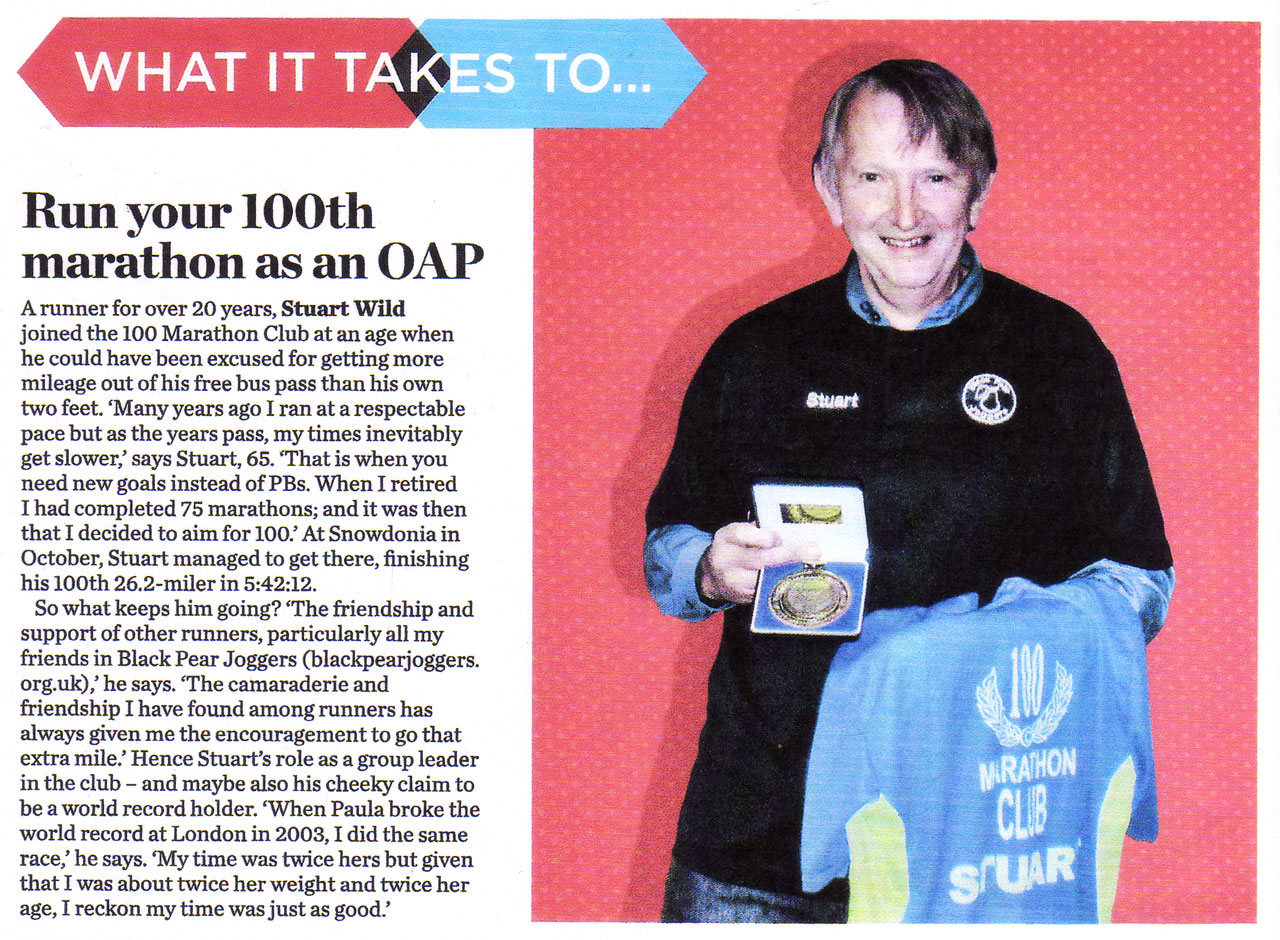 Stuart completed his first London Marathon back in 1991 when the club was known as Worcester Joggers Club as highlighted in this snippet from Worcester News.

One more to go

Stuart completed his 99th marathon at Chester. Here he is with fellow BPJs Donna and Steph. 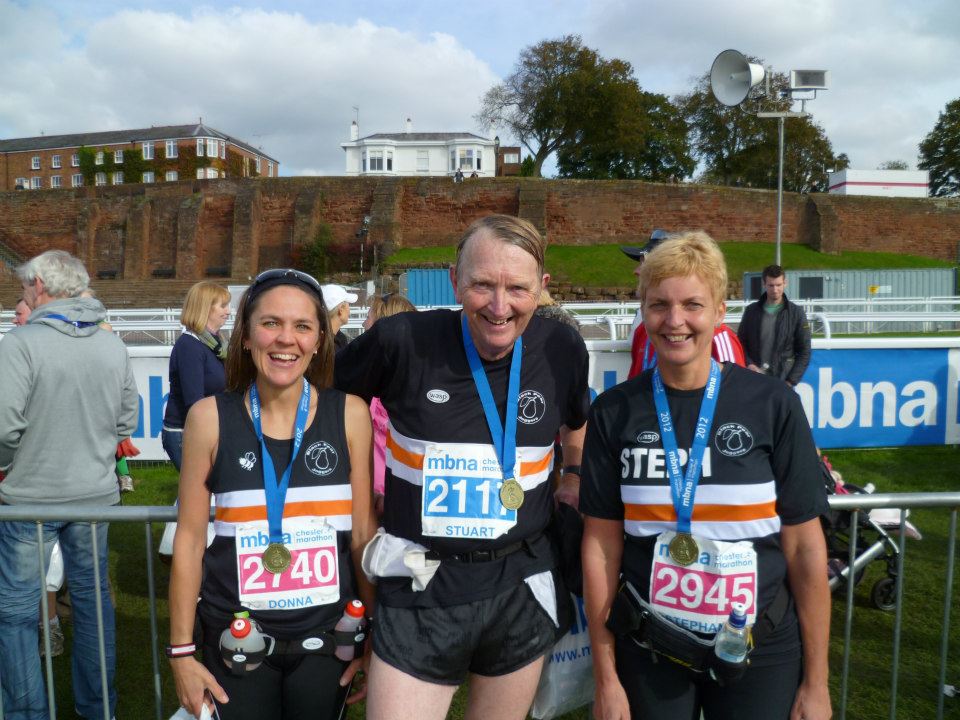 Stuart finished with a big smile on his face, cheered on by friends.

Stuart had begun to organise a new race, a multi-lap marathon with fellow runner Gavin Paskin when he suddenly passed away. Gavin continued ahead with the event and it was agreed it would be renamed in tribute to Stuart.

The inaugural event was held in July 2013, titled the ‘Stuart Wild Memorial Race’. Gavin, along with the marshals and volunteers ensured the day ran smoothly.

We had great support from everyone, including Black Pear Joggers and Malvern Joggers, many with great fancy dress costumes. Cleeve Ladies were fantastic, entering 3 teams, we also had Tarzan who was a great character. Dave Phillips from Massey Ferguson runners had completed over 400 marathons in 30 years, he said how much he enjoyed this event.

“Thank you to all the organisers and helpers for a special, wonderful day. Stuart would have been looking down on us all. Big hugs to everyone for encouraging and helping me along the 10 laps, it was fun. You really are a friendly, happy bunch. Keep smiling, lots of love from Supergran Jan xx

The race went down so well, the club had lots asking when the next one would be. So the race was renamed ‘The Wild One’ and a crack team of volunteers, led by race director Claire Shacklock started planning.

The Wild One has since raised thousands of pounds for charities and proved to be a popular event in the race calendar. Stuart’s legacy lives on. 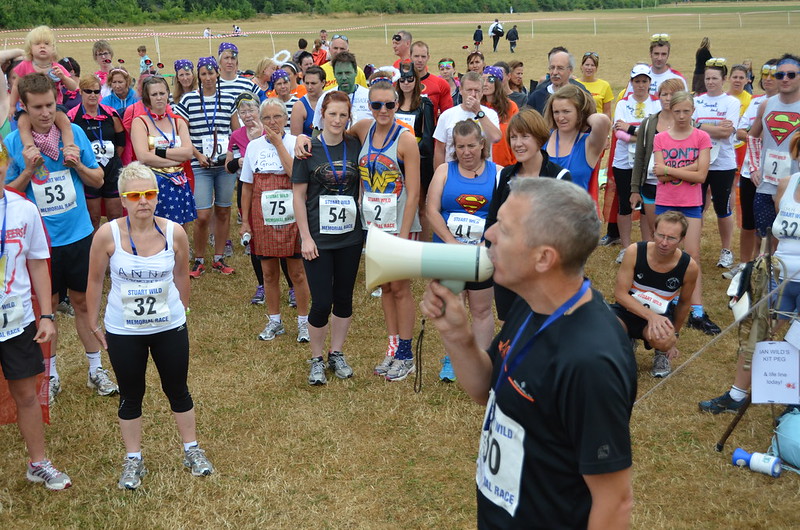 “I really got to know Stuart in 2005 when I started training for the London Marathon. Without his encouragement I would never have got over the finish line, and wouldn’t have carried on through 16 more marathons without his help and support. Over the years he and Sian became friends, and the running and the friendship of his company kept me going through the loss of my husband John.

We are all privileged to have known him and to have had him in our lives. It’s comforting to have seen him on Friday morning and then later in the hospital with Sian to say a final goodbye. I will miss him greatly, it is so very, very sad. I promise to keep running for as long as I can, as he would have wanted me to.

Rest in peace, Stuart, thanks for the memories, love from Jan.” – Jan McNelis

“I trained for my first two London marathons with Stuart some 10 years ago. Stuart was a wonderful man who will leave a memory for all of us. I couldn’t have to into distance running without Stuart. He will always be remembered and the club won’t be the same again. Sleep tight Stuart and keep on running x x” – Vicki Hancox

“Stuart was not only a great source of advice but the inspiration behind my taking up running marathons. He put the idea in my head last year after the Worcester half – seeing how i was enjoying my half marathons he said i could do it no problem….2 marathons later (both with Stuart at the start line too) my last goal is London, where last week i promised Stuart i would do my best to get under 4 hours for the first time. After all his advice on training, particularly about “mind over matter” I intend to give it my best shot to honour that promise to him. Will always remember him now on every long run i do. It was an honour to know him.” – James Matheson

“I obviously have not been a member of Black Pear for that long, but in that short space of time Stuart has been & was an inspiration to this “lot to learn” novice! He chatted away to me about all things London,he chatted away to me about all things running in general……he chatted away to me all things Hornby OO gauge & Railway too !! :-) Stuart helped me build my confidence & belief in running, gave me 4 months or so of the best training/advice that I could ever get, and on other “Jason” matters had always been a great listener & understanding person. A diamond, a mentor and all round Gent. Boy, I’m gonna miss you Stuart….and no doubt this Tall Guy still has a tear or two to spill yet, but I promise you this I’m going make every stride of my size 12s that little bit more worth while on whatever route they run, knowing that your watching down on me to guide me safely across the finishing line. God Bless.” – Jason Green

“I was deeply saddened and shocked to hear this terrible news – one of the fittest (and loveliest) men I know. Stuart was always full of encouragement and made early Sunday long runs a joy. He taught me that I could achieve a whole lot more than I thought possible, and took me and Claire on a fantastic adventure – 31 miles of Caerphilly. He was an absolute star, guiding us the whole way, giving us advice and of course, talking continuously! This was part of my marathon training and I later had the honour of running Llanelli marathon with him, and Peter too. I don’t know what I did to deserve running with 2 of the absolute greats.

Although I don’t often run with the club now, I will miss him hugely. It made my night to see his welcoming, smiling face at the Christmas do.

Lots of love to you Stuart, and thank you for being you.“ – Bev Brown

“Stuart was the guy who got me into distance running years ago, often driving over to my house in Fernhill Heath then running me round the lanes for hours. I wouldn’t have done many of the races I did and of course London if it hadnt been for Stuart’s help and motivation.

I bumped into Stuart just after Christmas on Perdiswell playing field and even then he was tempting me back to BPJ.

Stuart will be sadly missed, not just by all those who knew him, but by everyone who had heard of him. A legend who will remain in our hearts for ever. Lots of love.” – Kay Parry

“I have just heard the heart breaking news of Stuart’s death. It is devasting. Like many I progressed through Worcester and Black Pear joggers completely in awe of someone who not only achieved so much with his own running ambitions but also encouraged and inspired others to also achieve the seemingly impossible. I am sorry I am not in the UK to pay my actual respects but through a few tears and thoughts of my own i am sure he knows how much he meant to us. We used to fall out and get grumpy with each other at 15 miles but were always back on speaking terms by mile 21!!!

“Just got back to thinking about running so was having a look at what all you guys were up to,absolutely shocked by this terrible news.Stuarts Sunday morning runs changed my life and I remember those days with great joy.Stuart was a true gentleman and good sport and an inspiration for me and so many people.You will always be in my thoughts. With fond memories.” – Tony Bray