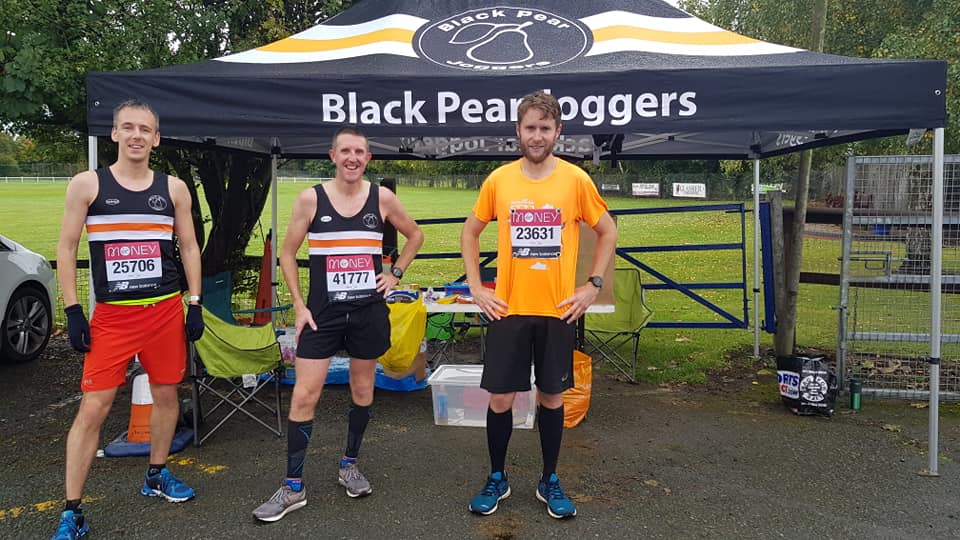 On Sunday, over 40 Black Pears completed their Virtual London Marathon after the actual event was postponed because of the coronavirus pandemic. Waking up to dark, wet and windy conditions, runners braved the elements to conclude months of tough training.

In the absence of the usual race support, BPJ and cross country captain Chris Attwood organised two Covid-secure aid stations along an 8.75 mile route that took runners along the canal, river and racecourse. Volunteers from the club gave up their time to man the stations offering water, sweets and gels, welcomed by many on the day.

Ruth Bennett raised over £1,700 for St. Richard’s Hospice through her ‘Ruth Runs a Marathon’ fundraising. Supported by husband Adrian who ran the marathon as well, Ruth earned a PB of 3:48:24 on Sunday. Ruth even ran another marathon last month as part of her charity efforts, running from Worcester to Malvern and back with over 2,000ft of elevation!

Thank you so so much to everyone at the gazebo by the Viaduct today. You have no idea how much you helped! Almost felt like that race day atmosphere for a minute. Thank you.

Outside of Worcester, some of the club’s speediest runners obliterated their marathon PBs at other events; running in a staggered time trial format to aid social distancing.

Ian Radford (pictured) lowered his own club marathon record to 2:38:42 in Gloucester. An amazing achievement following 4 cancelled marathons this year, 2 and half years of injury set backs .

Chris and a few others were interviewed by BBC Hereford and Worcester (listen online from 1:54:18).

Dave Williams beat his PB by 9 seconds (4:12:11) accompanied by guide BPJ runner Bex Jones, who has supported Dave over the last 2 years. The pair have completed many events together, forming an England Athletics compliant support bubble to train for the Virtual London Marathon.

We also raised £2,270 and counting for RNIB. Massive congratulations to everyone who ran and supported virtual London marathon around Worcester. In the face of a pandemic and atrocious conditions, you all stepped up to the challenge and are an awesome advert for the club and for distance running.

At 23 miles Anita is in high spirits after being supported by her Dad John for 17 miles (his longest run) and friend Jade who ran the final 8 miles with her, blasting out music along the way while carrying her rucksack. Anita finished in 4:43:37.

Lorraine, the BPJ cross country female captain finished in 4:11:23, supported by her sister Julie, husband Simon and friend Ewelina. Lorraine like others had spent a great deal of time training for the Spring marathon and then repeating the training again over the summer for this event.

In absence of the traditional Westferry support area where scores of BPJs traditionally meet to support the actual London Marathon course, Ian Wild improvised to support friend Jeremy Jones, who was pleased to finish his marathon in 3:44:53.

A huge well done to all the marathon finishers and thank you to Pete Boyle for the support and facilities at the Old Elizabethans Cricket Club along with all those that volunteered at the support stations and supported club members in their marathons.

If you have a photo and story you’d like included on here, get in touch!